What is World Water Day 2022? An event sponsored by the United Nations and over 24 international organizations concerned with fresh water supplies and protection worldwide. It occurs on March 22 each year, and this year’s theme is Groundwater, making the invisible, visible. Following is a collection of some interesting facts gleaned from articles, studies, and websites done by the organizations and government agencies listed at the end of this writing. 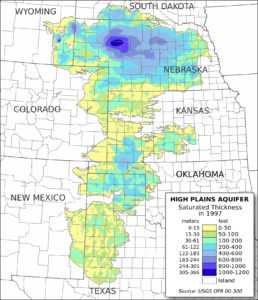 Groundwater – what is groundwater? It is water that is in the ground beneath us. The top of the saturated groundwater is called the ‘water table’. Groundwater occupies the spaces in gravel, split rock, sand, and other subsurface materials. Aquifers are saturated areas of groundwater, and may be well defined. The Ogallala Aquifer is the largest aquifer in the United States. It is part of the High Plains aquifer system, which underlies parts of eight states from Texas to South Dakota. An aquifer may be a few feet to several thousand feet thick, and less than a square mile or hundreds of thousands of square miles in area. For example, the Ogallala Aquifer underlies about 280,000 square miles in 8 states— Colorado, Kansas, Nebraska, New Mexico, Oklahoma, South Dakota, Texas, and Wyoming.

Almost 90% of the freshwater on earth is groundwater, and 60% of the US uses it for drinking water. It is also the largest source of US crop irrigation water at about 43% and accounts for about 1/3rd of industrial water used. Groundwater in the US is 96% freshwater, and about 4% brackish or saltwater.

There is an immense amount of water in aquifers below the earth’s surface. In fact, in the contiguous USA, there is over a thousand times more water in the ground than is in all the country’s rivers and lakes combined. 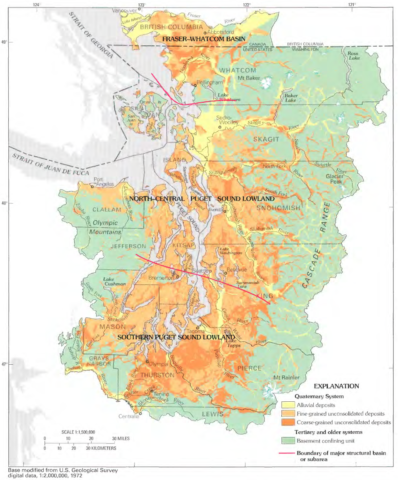 We live in what is known as the Puget Sound Lowland – bordered roughly on the north by the Fraser River and the US-Canadian border, on the west by the Olympic Mountains, on the east by the Cascades, and on the south by the Chehalis hills. The Lowland covers about 17,600 square miles, about 2,500 square miles of which is saltwater. There are at least 30,000 freshwater wells in the Lowland most of which (80% or so) are less than 175 feet deep. Due the effects of glaciation, there is a large number of aquifers in the region. For a thorough discussion of the area, please see the USGS Professional Paper 1424-D in the Reference Section

Many Water Districts in Washington have tapped aquifers for all or part of the fresh water they provide their customers.

Some groundwater is used and then released to surface water bodies, such as rivers or lakes, but it is almost never pumped back into the ground. Instead, groundwater is replenished almost entirely by rainfall. In the United States, roughly one quarter of all rainfall becomes groundwater.3 Water consumption refers to the water that is withdrawn for human use but not returned. Irrigation accounts for around 80% of fresh water consumption:7 most is lost to evaporation and the incorporation of water into crops. However, more modern irrigation methods, such as drip and buried drip systems do better at targeting specific areas and use much less water as a result.

The Effects of Contaminated Groundwater

Contaminated groundwater can result in many unfortunate situations, including:

Special Board Meeting will be November 30 @8am – Agenda